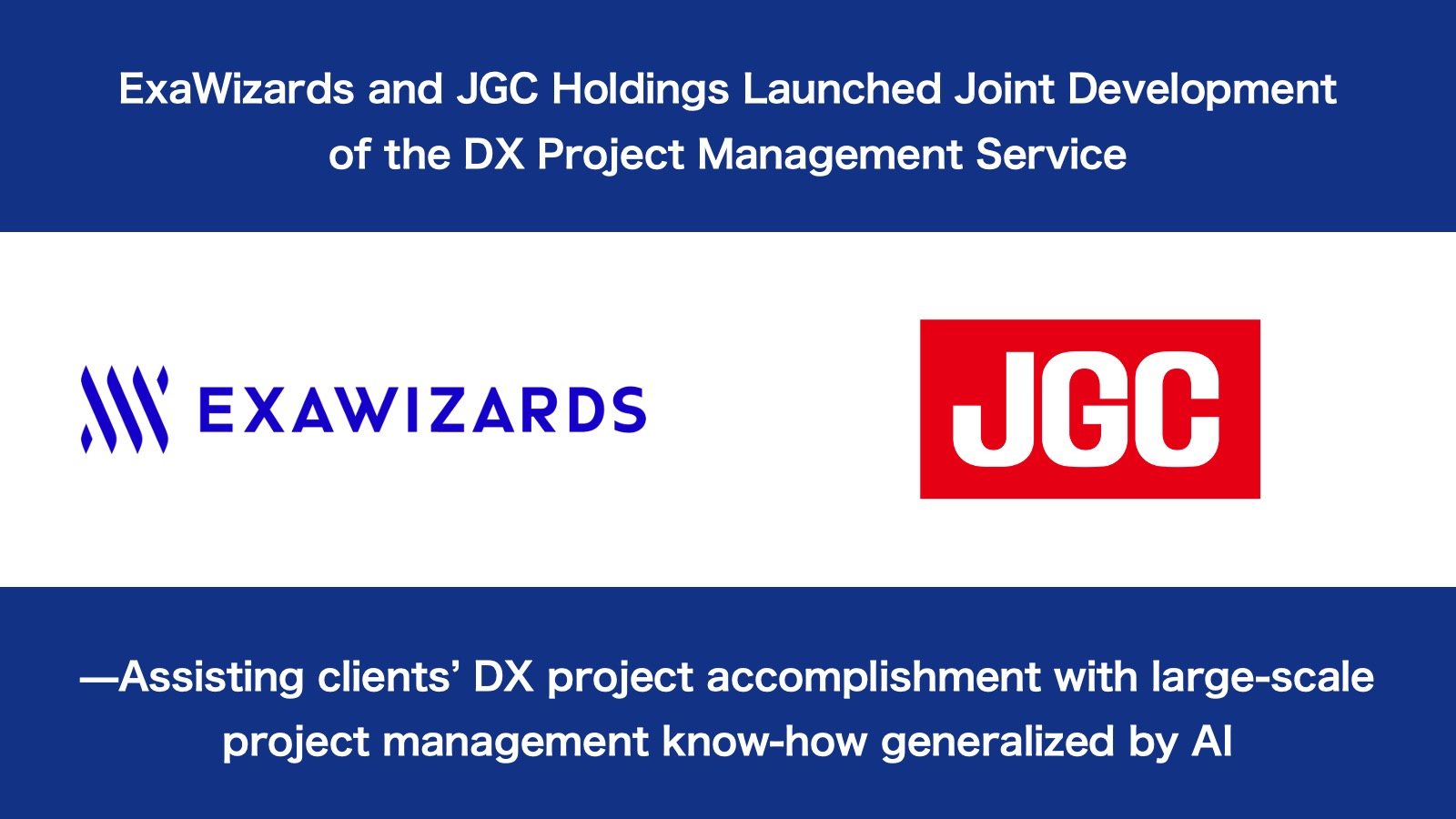 Intensifying competition with overseas companies and tight labor market due to decline in the labor force population are of the key management issues that the companies are facing today. It is imperative to promote digitalization of businesses -and the digital transformation (DX) which lies beyond it- as the effective approach to increase the labor productivity. However, the report issued by Ministry of Economy, Trade and Industry in 2020 suggested that only 5% (*) of the companies were continuously implementing the cross-sectoral DX promotion efforts in Japan, and many others were having trouble in making desired progress in the DX project, or even in its preliminary digitalization projects.

In collaboration with the JGC Group, ExaWizards will assist the client companies in management of their digitalization/ DX promotion projects, support their successful completion, and eventually contribute in resolution of management issues of the companies through DX by exerting synergy effects of know-how for management of large-scale, long-term projects, know-how to accumulate completion data and the domain knowledge on the production site that JGC Group has cultivated through the plant construction projects and ExaWizards’ know-how for the AI/DX implementation.

Specifically, consultants from both ExaWizards and the JGC Group will execute and complete the DX project with the client. While providing the service to cultivate and establish the business process evolved by digitalization/ DX as an aspect of the client’s corporate culture, we will enhance the value added and reduce the cost by automating the respective project management functions based on the accumulated digitalization/DX project completion data, and further evolve a diversity of project completion services not limited to the digitalization/DX service in the future.

Through this joint development, ExaWizards and the JGC Group will accumulate knowledge on “digitalization of customer contact/management, material order management, production management, shipping/inventory management, human resource management, and financial management” and “DX that leads to creation of new businesses as well as the improvement of productivity, optimization of services, enhancement of the corporate value including energy conservation, de-carbonization, and ESG management by utilization of data to further enhance the service”.

[About JGC Holdings Corporation]
With its principal businesses of general engineering, functional materials manufacturing, and energy/environment consulting business, JGC Holdings Corporation operates businesses in a variety of regions, having more than 80 affiliated companies worldwide as a holding company. In the general engineering business that covers design of plants and facilities, procurement of equipment, construction work and maintenance in both the oil & gas and the infrastructure fields, the overseas projects are led by JGC Corporation, while the domestic projects are led by JGC Japan Corporation. For the functional material manufacturing business, JGC Catalysts and Chemicals Ltd. and Japan Fine Ceramics Co., Ltd. are engaged in development, manufacturing and sales of catalyst fine ceramics products, respectively. JAPAN NUS CO., LTD. takes part in a wide variety consulting business regarding energy and environment.