ExaWizards and KAWADA ROBOTICS Jointly Develop “exaBase Robotics Powder Weighing for NEXTAGE,” which Accelerates and Automates Powder Weighing Operations in the Manufacturing Industry with Humanoid Dual-Arm Robot
– It shortens the turnaround time of all weighing operations by approx. 30%, and realizes as high accuracy as manual weighing – 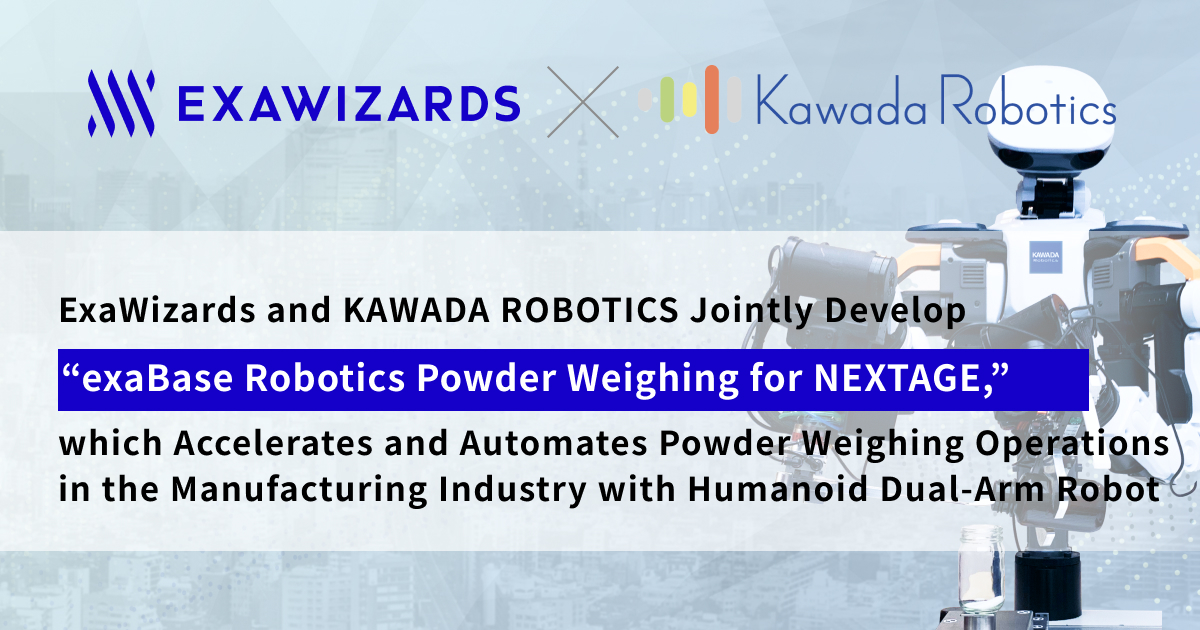 In the cosmetic, pharmaceutical, and food industries, which are sometimes grouped together in Japan, and the chemical industry, there are a number of routine tasks to weigh powders in the production/quality inspection/research and development processes. In recent years, the manpower shortage has been more and more serious due to the decreasing labor population. Under such circumstances, to improve productivity through the utilization of AI and robots that automate these tasks is an urgent issue to tackle.

However, with conventional methods using existing robots, it is difficult to automate the weighing operations in which several types of powders with different physical properties are simultaneously handled, or various containers such as bottles and buckets are used although the weighing of a specific type of powder can be automated.

Also, even with an AI robot arm used for the purpose of the automation of weighing operations, it takes 1.5 times as much time as a human does to complete the entire process including bottle delivery, weighing, and post-weighing bottle delivery since a single-arm robot can only handle one task at a time, say it holds a bottle, and then weighs powder with the spatula.

☑︎ The weighing operation in which several types of powders with different physical properties are handled, and various containers are used can be completed by one robot spending almost the same amount of time required for a manual operation
As a solution to the above issue, ExaWizards and KAWADA ROBOTICS jointly developed “exaBase Robotics Powder Weighing for NEXTAGE” to realize the acceleration and automation of weighing operations in the manufacturing industry.

With ExaWizards’ multimodal robot AI Solution “exaBase Robotics,” which automates the weighing operations in which several types of powders with different physical properties are handled, and various containers are used, and KAWADA ROBOTICS’s humanoid dual-arm robot “NEXTAGE,” which holds a bottle and weighs powder at the same time using its two arms, we could shorten the total turnaround time spent for bottle delivery, weighing, and post-weighing bottle delivery by approx. 30% compared to methods using a conventional AI robot arm. We realized the automation of more quick and accurate powder weighing. 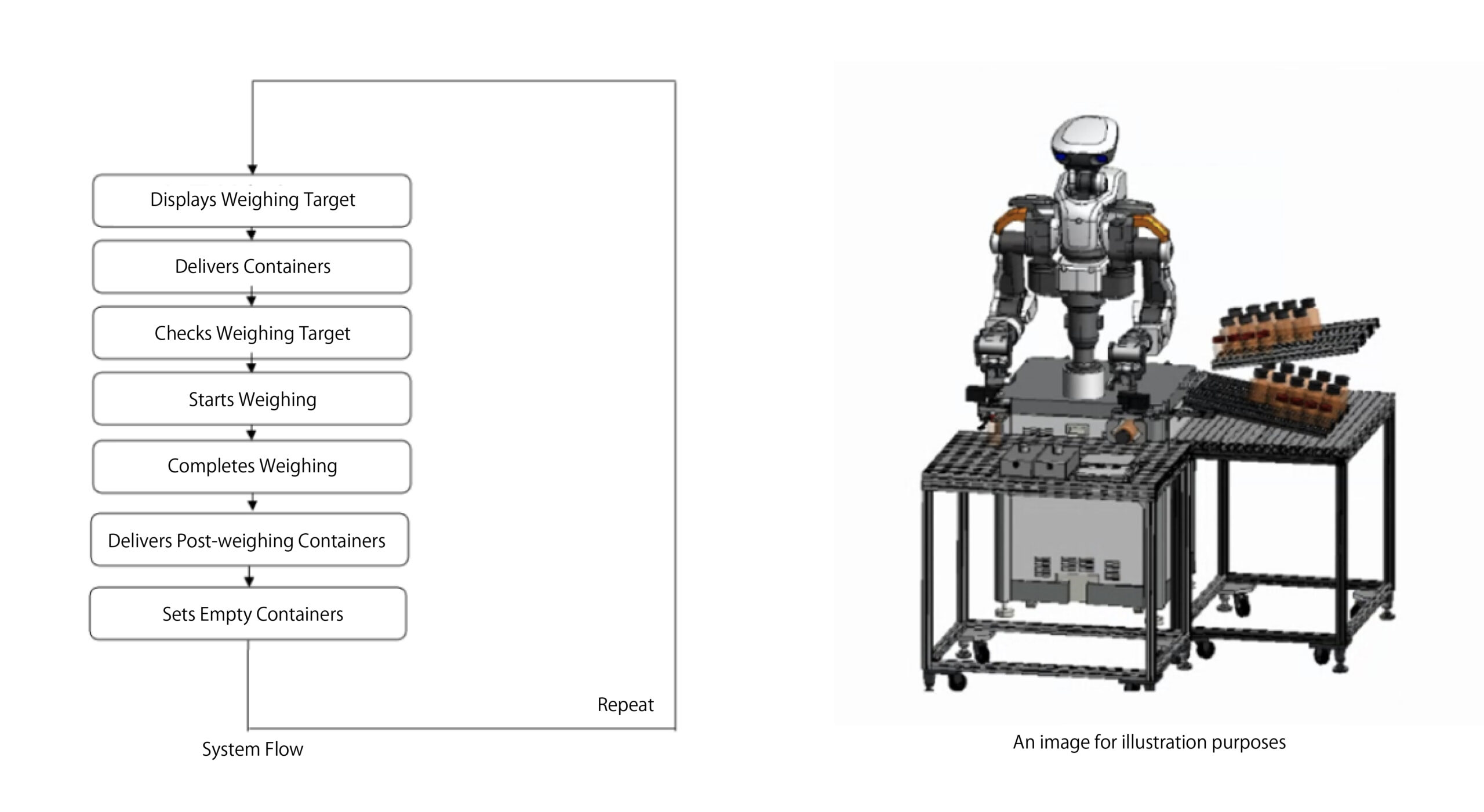 With the robot AI solution “exaBase Robotics” that realizes the automation and optimization of operations utilizing various multimodal data such as image data, on-site equipment/robot control data and simulator creation data, ExaWizards has so far strived to improve productivity and quality in the production site.

Also, KAWADA ROBOTICS aggressively conducts joint projects with its users and technical partners aiming to expand the use of the humanoid robot “NEXTAGE,” and explore other possibilities. In the food, pharmaceutical and cosmetic industries as well as in many workplaces including laboratories, there are expectations for solutions provided by the humanoid robot “NEXTAGE” to the weighing operations which are currently manually done on site.

ExaWizards and KAWADA ROBOTICS will be further committed to the improvement of quality and productivity in the production site through not only the deployment of this service but also the promotion of one-robot-based process automation while exploring the possibilities of developing weighing systems for things other than powders such as liquids going forward.

(1) Automated weighing operation, the cycle time of which is almost the same as that of manual operation
The dual-arm robot simultaneously holds a bottle and weighs powder with the spatula and, completes the weighing process spending almost the same amount of time as a manual process.

(4) Contamination prevention
The spatula is automatically replaced with a new one in accordance with the type of powder, which leads to the prevention of contamination.

☑︎What is “exaBase Robotics”?
”exaBase Robotics” is an AI solution for robots that automats and optimizes operations utilizing various multimodal data such as image data, on-site equipment/robot control data, and simulator creation data. It can be used in in various contexts, e.g., when you need an alternative for a simple task, or when you want to replicate the skill of an expert.
exaBase Robotics site: https://exawizards.com/exabase/robotics/

☑︎What is “NEXTAGE”?
KAWADA ROBOTICS has developed, manufactured, marketed, and maintained “NEXTAGE,” the humanoid robot that works with humans since it launched the conceptual model in 2009. More than several hundreds of NEXTAGE models have been mainly introduced to the assembly/inspection/packaging operations in Japan’s manufacturing industry over 10 years. NEXTAGE perceives the target around it by recognizing the images recoded by the cameras mounted on the head and both hands to work on it using the two arms, which realizes the flexible automation that allows you to use the existing work environment for humans as is.

In order to improve the portability and operation speed, and strengthen the reliability, NEXTAGE was remodeled as “NXA” in 2018, and then a new model named “NEXTAGE Fillie” capable of more compact and agile movement was added to the lineup in 2022. KAWADA ROBOTICS strives to further promote the spread of humanoid robots that work with humans through the deployment of the NEXTAGE series consisting of the two models of “NXA” and “NEXTAGE Fillie.”
NEXTAGE site: https://nextage.kawadarobot.co.jp/
*NEXTAGE and Fillie are KAWADA ROBOTICS’s registered trademarks.